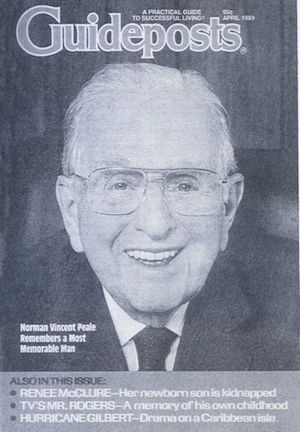 Steps Work for Anyone

Many years ago I met a remarkable man known to millions all over the world as Bill W. His full name was William Griffith Wilson, but most of the time he preferred not to use it because self-effacement was so important in the organization he and a friend known as Dr. Bob had founded:  Alcoholics Anonymous.

Bill W. was a tall, courtly man. To look at him, back in the days when I knew him, you never would have thought that he had been a hopeless drunk. When I asked him once how the miracle of his recovery had happened, he gave me an answer so vivid and so simple that I never forgot it. “I had reached the end of the line,” he said. “I was powerless to save myself from an evil force that was stronger than I was. One night I went up on a windy hill and looked at the stars and cried out to God. I begged Him to let the great healing wind of His Spirit blow through me and make me clean once more. And He heard my cry. I never touched alcohol again.”

Bill was an eloquent speaker. He was also a modest man. Once, I remember, we were talking about heaven. Doubtless remembering his dismal days as a drunk, Bill said that he probably would never get there. “Yes, you will,” I assured him, “because you have lifted more people out of hell than any person I know.”

I thought of Bill the other day when his gracious wife, Lois, died after long and faithful service in such groups as Al-Anon and Alateen. When I heard that Lois had left us to be with Bill, something impelled me to go to the bookcase and take down a volume containing the Twelve Steps that have given so many hopeless people victory over alcohol. I reread them, sensing the tremendous spiritual power that is packed into them, and I realized that for years I had been making a mistake that I’m sure is very common — the mistake of assuming that the steps are for alcoholics only. Now quite suddenly I saw that the power contained in them could be tapped by anyone wrestling with a power stronger than self.

Alcoholism is a deadly evil, certainly. But what about the millions of people in bondage to some other form of compulsion? Gamblers who cannot stop gambling? Unfaithful marriage partners who can’t stop being unfaithful? People consumed by hatreds or grudges they can’t relinquish? Shoplifters or habitual thieves? Compulsive liars? Tax evaders? The list is almost endless.

But the wonderful truth is this: God becomes directly and actively concerned with us humans when we want Him enough. The Twelve Steps are a channel through which we can direct our appeal to the one Power that can lift the burden from us no matter what that burden is.

You will find the Twelve Steps by clicking here. Let’s glance at each of them and try to pinpoint some of the key words or key ideas that are just lying there, waiting to be picked up and used by any of us, alcoholics or not.

Take the very first phrase: We admitted we were powerless. Look at your own life carefully; what are you powerless over? As a young man I was powerless over a terrible inferiority complex that held me in its grip and made my life miserable. One day, in despair, I sat down on the steps of Gray Chapel at Ohio Wesleyan, told the Lord that I was helpless and asked Him to remove this burden…which in His great kindness He did. But it was the admission of helplessness that let the power come through.

Or take the second step: Came to believe that a Power greater than ourselves could restore us. The selfsurrender is terribly difficult; it may take years. But once again, the important thing is to decideto do it. As the Chinese philosopher Lao Tzu wrote many centuries before Christ, “A journey of a thousand miles must begin with a single step.”

The fourth, fifth, sixth, and seventh steps involve deep and honest self-examination, admission of wrongdoing, and willingness to have God remove our faults and character defects. That willingness is absolutely essential; there’s no use asking God to remove some weakness from our lives when deep down we really don’t want the change to take place.

And the requirement to admit our faults to a third person (why not your minister?) is also of great importance. Once that is done, the guilty secret is out in the open where it can be dealt with, not locked in some dark area of your heart or mind. This is not easy; none of the Twelve Steps is easy. You just have to remember that you are climbing a ladder to a better life, a better self, a closer relationship to God — and that the rewards infinitely outweigh the difficulty or the pain.

Steps eight and nine involve making amends to persons you may have wronged or injured. Not just some of them. All of them. This too takes great courage and determination, but when it is done, invisible chains fall away. The universe is an ethical place of great balance and harmony. If you have wronged someone, that harmony in you is damaged; you are out of balance with the universe and the Creator of that universe. When these imbalances are removed, a great surge of joy and well-being will sweep through you.

The last three steps are really a reiteration of the first nine, with the added injunction to share what you have learned spiritually with others. I remember a good definition of a Christian that I heard or read somewhere: A Christian is a person whose life makes it easier for others to believe in God. I’m convinced that anyone who studies and masters and applies the Twelve Steps will become such a person, whether he or she is an alcoholic or not.

What the Twelve Steps do, really, is bring a person closer to God, and as I have said so often, when that happens, anything can happen. Sometimes you don’t even have to approach God in a reverent or positive way. I remember one rainy night in New York when I was working in my office at Marble Collegiate Church on Fifth Avenue and 29th Street. My secretary, Mary Creighton, tapped on my door and said that a man from Brooklyn wished to see me. “He seems to have some kind of problem,” Mary said.

The problem the man had was a drinking problem, and he wanted me to help him with it. “I’ve tried all the others,” he said angrily. “All they give me is a lot of talk about God. I’m sick and tired of hearing about God. I want a human solution and I want you to give it to me!” I could tell from his breath and general demeanor that he had brought some of his problem with him. “How can I handle it?” he kept saying. “How can I handle it?”

“Friend,” I said, “I think you may have come to the wrong place. God is in charge here. All I do is try to put people into contact with Him.”

“You too!” he cried. “You too! I told you, I’m sick of all this God stuff!” And he stormed out of the office, muttering under his breath, somewhat to the alarm of my gentle secretary.

But twenty minutes later Mary tapped on my door again. The man was back. He wanted to see me again. “He’s changed,” Mary said. “He seems different, somehow.”

The man indeed was different. He had a stunned look on his face. “I think I’m going crazy,” he said. “I think I must be nuts!”

He told me that he had left the church and walked along 29th Street, ranting and crying out, “God! God! I’m sick of this God stuff!” He said that as he walked along, denouncing the very idea of God, suddenly an unearthly radiance lit up the dark street. Buildings glowed with it. The faces of passersby shone with it. Even the sidewalks seemed bathed in it, and he himself was full of light. The experience left him stunned, overwhelmed.

“What happened to me?” he kept saying. “Am I going crazy? What happened to me?”
“My friend,” I said, “you’ve just had a religious experience. I might well call it a mystical experience. The God you have been denying reached out and touched you, and you should start thanking Him right now, because it wouldn’t surprise me if your drinking problem is solved and your drinking days are over.”

And this was indeed the case, because he kept in touch with me for a long time and told me that he never touched alcohol again.

So if you have a problem that you cannot master, be it alcohol or anything else, I heartily urge you to study the Twelve Steps. Apply them to your own difficulty, remembering that, in a very deep sense, each step is a prayer. Countless people have found that when they do this humbly and sincerely, miracles happen.

Such a miracle can happen to you.

Kids Helping Themselves & Others

Wild West Way! enables them to:

Does this excite you?

Wild West Way! will be brought to fruition and sustained by a wide range of people. Do you feel compelled to be part of the start-up team? Let's talk.